Within the Dixon’s Apple Orchard logo is an image of a bear. Fred Dixon, the founder of Dixon’s Apple Orchard and grandfather of current owner Becky Mullane, told his family many stories about his life. The bear story below was one of their favorites, and it inspired the bear inside the logo.

Fred’s grandson Dale interviewed Fred in his last days and was able to capture the bear story in Fred’s own words.

To fully understand the bear story you are about to read and glean the leadership lessons, you need to understand the people and places in Fred Dixon’s life.

Faye was his wife of many years. They were inseparable best friends and loved each other beyond words.  Faye passed away in December, 1985.  The next 24-years were tough on Granddad.  He spoke of her often.  She was a matriarch in every sense of the term.

La Canada is in New Mexico – where Fred and Faye built Dixon’s Apples.  They called it Canada and ‘The Ranch.’  To this day, thousands of people make the pilgrimage to this rocky canyon at 6,000 feet altitude to buy three patented varieties of apples that can be found nowhere else on the face of this earth.

The Ranch is a special place and unforgettable to anyone who’s spent any time there – in awe of the steep rock walls contrasted with the delicate apple blossoms on precise rows of trees.

The orchard is irrigated by sprinklers pumping water out of three ponds – or sumps.

“This was down at Canada and Faye was real ill.  We’d been up a lot during the night.

I had seen a coyote in the upper orchard and that coyote had froth and foam hanging down from his lower jaw and I thought it had rabies.  It was about apple harvest time and I knew we had to get rid of that coyote; he might bite somebody and give them rabies.

So, really early, I had the pumps on and I went down to turn the pumps off at four o’clock in the morning.  I tied the dogs up because I didn’t want the dogs to chase the coyote.  On the way back, I came by the foreman’s trailer, Fidel Comacho was the foreman then, and he was out walking around.  He asked, “Where are you going?”  I said, “I’m going to see if I can kill that coyote.”

We went to the upper orchard and got up there and were walking along up this arroyo where we had seen the coyote and there was a little peach orchard up there.  We knew there was a bear around.  The trees were just smashed down, torn up and laying on the ground, most of them.  The peaches were about ripe.  We always canned peaches.  Fidel and Amalia canned peaches, too.  Fidel said, “I’m going to go see if there’s any left that we can can.”  Fidel went in there and just as he got by trees, why, there was a bunch of weeds exploded and this big brown bear came out after him.  It got after him.  You watch football; it was just like that quarterback with a tackle after him.  It looked like the bear was playing tackle and trying to get Fidel who was carrying the ball, only he was just trying to get away.  I had the gun and was going to shoot, but I knew the way they were running I was afraid I would shoot Fidel, too.  So, I just ran between them.  I thought I could scare the bear away.  But, the bear didn’t run.  The bear grabbed ah hold of me by this arm.  I had a brand new Eddie Bauer coat that Great Grandmother had bought for me.  I still had a hold of the gun.  But, he picked me right up off the ground and shook me.  I dropped the gun.  Fidel had never seen a live bear so he ran.  But, when he saw what was happening to me, he came back.  The bear and I got down in the ditch that was there.  I was trying to get my hand down the bear’s throat because I’d read that if you could ever get your hand down a dog or wild animal’s throat, and get to the back of his throat, that his tongue is real rough and you could get a hold of the tongue and he couldn’t bite you.  All the time, the bear didn’t scratch me, he was hitting me.  I had hearing aids in glasses at that time and later on you Great Grandmother found those glasses about 40-feet away where he hit me in the side of the head and knocked the glasses off.

Fidel came back and we were down in the ditch.  I was still after the bear and the bear was more than after me.  When Fidel came back, why, the bear turned loose of me and was going to go after him.  As he went by me, I was on my knees and I hit at him.  I hit him right in the end of the nose.  He turned right back around and grabbed me in a different place on this arm and we started the whole thing over.  Fidel wanted to shoot him and I said, “Don’t push any buttons,” because on an M1 Carbine the safety is in the trigger guard and there’s another button right close to it and if you push that, it lets the clip with all the extra ammunition out.   So, he handed the gun down into the ditch and I wore a big black hat.  It had fallen between us.  I got the safety off and held the gun and Fidel shot, pulled the trigger, and shot the bear 13 times.  Some of those went through my hat.

Later on when I quit hurting so bad, I got after Fidel and told him he owed me a hat for what he’d done.

Anyway, I was kind of a mess.  There was down everywhere where it had torn that sleeve out of that coat.  I was bleeding quite a bit.  Fidel was one of those guys that couldn’t stand the site of blood.  He passed out.  He was a Mexican boy.  He was brown in color, but he was whiter than that shirt you have on.  So, I told him, don’t look, just get your shirt off and get it to me.

The bear kept coming and kept coming.  I had to get in my pocket and get more ammunition.  I shot the bear in the head behind the ear and killed it.

We went down to the house and your Great Grandmother came out of the house in her bathrobe and her hair up in curlers because it didn’t matter how sick Great Grandmother was, she always fixed her hair and put on makeup.  She was going this way (thumbs up) because she heard us shooting and thought we got the coyote.  Then, she saw what had happened to me and she had to take us to town.

The bear hit Fidel, but never marked him.  I’m not going to tell you, because you might try it – but if you get hit on the muscle here, a great big lump comes.  That’s what happened to his arms where the bear had hit him.  But, I made him go to town with us because I wanted him checked out.  We had a 1974 Mercury that I kept just to take your Great Grandmother to the doctor.  She was driving, and I looked down and she was going 99 miles an hour.  By that time I really didn’t care, but I made her slow down.  When we got to the hospital, I made them look at Fidel first. He was OK.  They wanted the head of the bear right away to see if the bear had rabies.  A bear, usually, will run from you.  So, Faye took Fidel back.

They shot me full of pain killer and sewed me up.  I think, as I recall, there were 70-some stitches in that arm.  They bandaged it up and took me back to the ranch.

I had a friend who was chief of the state police, Joe Black.  So, I called Joe Black and asked if he had a policeman going to Albuquerque, that I’d like to send the head down to University Hospital.  He said, “Oh, sure.”  Well, he got on his radio and talked so every game warden, every sheriff, everybody knew about it, and boy, here everybody came to the ranch.  I can remember sitting in a chair, a leather La-Z-Boy, and this arm, the medicine was going out and I was hurting.  The game warden, a good friend, was sitting next to me.  He said, “I hate to do this, but I have to ask you, do you have a license?” (laughter).  I did.  In those days I always bought a license.

Anyway, that’s the bear story.  The bear didn’t have rabies.  But, we couldn’t figure what it was because one place on my elbow you could see four…A bear has two big teeth up top and two big ones at the bottom.  You could see where those went in.  The other place he got me, down lower, was there were just three holes.  The reason there were just three: when the bear came back around to go after Fidel and I hit him, I broke a front tooth off or loosened it.  And, that’s why this hand, and you can see, it’s not the only reason, but that’s part of the reason this hand is as bad it is.  At that time, it was all black and blue and swollen.” 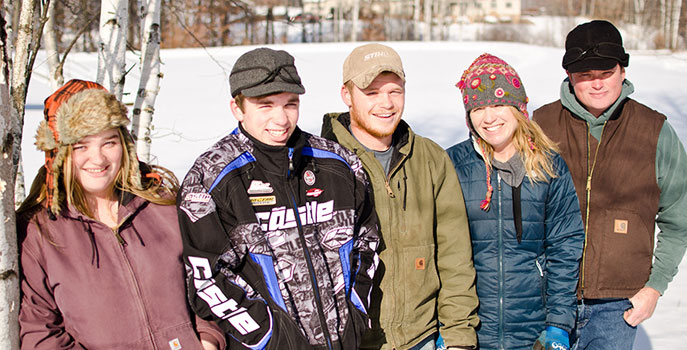 In 1944, Fred and Faye Dixon started a family tradition in New Mexico that has transcended decades; a tradition their granddaughter Becky Dixon Mullane and her husband Jim have transplanted to their new orchard in Cadott, Wisconsin...

Our Weddings
Our Apples
Our Winery
Happy Thanksgiving, everyone! Our family is incred

The beginning of the next chapter together! 😍

We are all about this! 🖤🤍 📸Mueller Phot

Create the wedding of your dreams at Dixon's! Our

Not a cloud in sight on this beautiful summer nigh

It's been a hot second since we've posted a beauti

Also check us out on:
WeddingWire & The Knot
Book Your Event

Thank you to our amazing photographers!